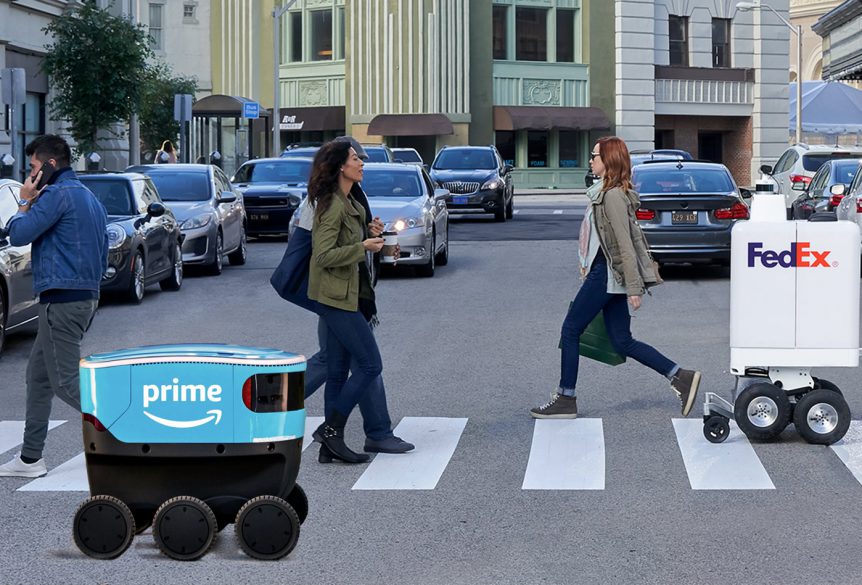 Autonomous delivery robots have made the leap from future tech to reality. In some settings, they are already out and about, navigating sidewalks, interacting with humans, and (in at least one case) catching fire. Early adopter companies say that delivery bots will turn personal delivery from a pricey luxury to a free (or nearly free) everyday convenience. Just think, there’s no need to tip the robot pizza delivery guy!

The large FedEx SameDay Bots were designed by DEKA Research & Development Corporation (which also makes the Segway) and feature an intelligent wheel system for traversing various terrain. The battery-operated bots also include pedestrian-safe technology and will run on sidewalks and along roadsides in select markets beginning this summer.

These delivery bots are bringing food and other items to hungry college students. First deployed on the campus of University of California Berkeley in 2016 (with one famously catching fire in 2018), Kiwibot robots are now seen at several colleges in the United States. With this app-based network of boxy, knee-high, wheeled machines, a robot rolls to an eatery to be loaded with a student’s order, which it then delivers to the student’s location — or as close as it can get. Stairs are still an obstacle for these devices.

Kiwi developers say the robots are much more efficient than Uber Eats or Grubhub because the bots can deliver more food in less time. Apparently, the college community loves them because the diminutive robots mesh seamlessly with sidewalk traffic and even have emoji-like “expressions” on a front-facing digital “face,” encouraging interaction with bystanders. Kiwi’s goal is a network of 500 robots making thousands of daily deliveries to college students nationwide.

Not one to be left out of any development involving retail commerce, Amazon also has unveiled plans to use delivery bots to delight their many customers. The Amazon Scout bot is currently in a small pilot program in a suburb outside Seattle, making deliveries only during the day and only when accompanied by a human “chaperone.”

Seeming a little late to the game, the 6-wheeled Scouts move at the average pace of a walking human so as to blend in well and not attract chasing dogs. The boxy shape is not revolutionary, and these wheeled bots are not the flying Amazon drones you may have heard rumors about last year.

These are just a handful of the many delivery bot systems that are underway or in development. Customers who receive deliveries from robots are happy to get their items intact and in a timely way. Moreover, the bots save money for companies and are environmentally healthier than idling trucks that continually pollute the air.